Tammy McCray had one goal: to graduate with her degree before she turned 60.

As a recipient of the ’CATapult Scholarship, the 59-year-old was able to do that in December 2020 with a degree in communication with an emphasis in public relations and advertising.

“After that I’m going to sit and rest,” McCray said, laughing, as she planned her graduation last fall. Eventually, she hopes to use her education to promote her own photography business.

Without the scholarship, McCray wouldn’t have had the financial means to finish her degree during the fall semester. She knew it would have been twice as hard to return to school if she took time off to save, and she didn’t see getting a loan as an option. 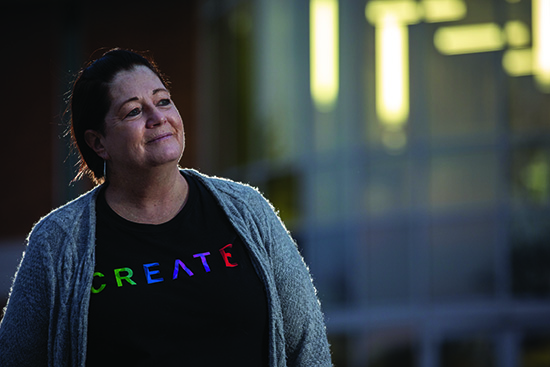 On top of that, her mother passed away the prior spring, followed shortly by her nephew, and then by another nephew. This made staying focused on classes, let alone paying for them, a challenge.

McCray’s advisor, Leslie Howerton, suggested she look at scholarships to get through her final semester, which resulted in her applying for the ’CATapult scholarship.

Mortensen said the idea for the program came from students who shared personal examples about how hard it is to stay in school with financial challenges.

“Some students didn’t say anything and quietly dropped their classes before the tuition deadline every semester,” he said. “We know that scholarships dedicated to students working to cross the finish line in their final semesters — like the Jack & Barbara Magdiel Scholarship Endowment — really make a difference to help students finish. So, we wanted to do something bold to eliminate the financial barriers for students who have already put so much effort into their degree.”

McCray tried once before to pursue higher education at Weber State, but stopped to take care of her daughter after she contracted a staph infection while giving birth.

Even though her road to a degree has been long, McCray has continued working full-time at MarketStar, a local sales and marketing company, while pursuing her dream.

McCray said students should believe in their dreams no matter what, and never give up.

“This has been on my bucket list,” she said.

Make your gift today at weber.edu/catapult.