Kirk Thor took his WSU psychology studies to the Pentagon, NFL and top of the corporate ladder.

Sometimes it’s our setbacks that allow us to discover our true paths.

Kirk Thor BS ’88 graduated from Bonneville High School with scholarships in tennis, engineering and leadership. “I had my choice of Brigham Young University, Colorado State, Air Force Academy, Weber State, University of Utah and Utah State,” said Thor, listing a handful of the schools that offered him admission. But it was an easy choice for the athletic, up-and-coming undergrad: He wanted to fly. 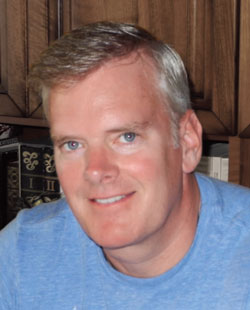 Thor’s father, Robert Kent, was a fighter pilot for 10 years and later an airline pilot for 35 years, allowing him to see the world at a young age. “Growing up, I lived in Germany, Iceland, California, Colorado, Utah, Maryland, Virginia and Washington, D.C.,” Thor recalled.

But unlike the Norse god who shares his name, Thor didn’t take to the skies.

After following his father’s footsteps to the Air Force Academy, Thor suffered a football injury that kept him grounded. “When I hurt my knee, I lost my pilot qualifications, and I got an honorable discharge from the Air Force,” Thor said. When he was ready to return to school a year later, he landed at Weber State College.

“None of the other schools would honor my scholarships,” Thor said. “But Weber State did; they said, ‘We still want you.’ They were still willing to take a chance on me. I will always owe them for that.”

Thor’s Weber State education paid off. In 1988, he earned his bachelor’s degree in psychology, which set him on a path toward prominent positions at Walt Disney World, the Pentagon, consulting for the NFL and his current role as vice president of talent management and organization effectiveness at Flowserve Corporation in Dallas, which manufactures pumps, valves and seals.

Much like flying planes, psychology was a part of Thor’s formative years.

When he was 15 years old, Thor held a custodial job in the surgery ward at a hospital in Ogden. “I was doing that one night when somebody was admitted to the psychiatric unit who had smuggled in a knife,” he said. “They called a code blue, which meant any male could go to the location and help with a problem. So, I dropped my mop, and I went up there.”

After seeing Thor calm the situation by talking to the patient, a psychiatrist at the hospital asked Thor to become his assistant in the psychiatric ward.

Before starting college, Thor worked in the psychiatric wards of four hospitals in the Ogden area.

Thor’s career has included stints at Walt Disney World, where he ran the organization development team, and JCPenney, where he was vice president of talent management, but the work he’s asked about most often was at the Pentagon and later consulting for the NFL.

While earning his master’s degree in organizational effectiveness and doctorate in industrial psychology at George Mason University, Thor spent five years working at the Pentagon, developing psychological assessments to recruit soldiers for special operations. “These groups go behind enemy lines and operate in live-fire conditions,” Thor said. “You would think that they would need to be expert marksmen and have all of these military combat skills and expertise, but that was only the foundation.”

“People who pay money to put themselves in situations where they would die unless they save themselves [are] the types of people who operate very well in live-fire situations.”

Operations also called for soldiers who were collaborative, complex problem solvers and able to think clearly in life-or-death situations.

Having been through his own Air Force Academy training, Thor knew training exercises wouldn’t determine if a candidate could stay focused in a fatal situation. “We had to crawl under barbwire, and there were explosions all around us and tires flying up in the air,” Thor recalled, “but we knew the country was not going to kill us. We knew we were in training at a military academy.”

So, how could he measure a soldier’s performance when the bullets were real?

“The answer is extremely simple,” Thor said. “We found that people who pay money to put themselves in situations where they would die unless they save themselves were the types of people who operated very well in those live-fire situations.” Ideal candidates included skydivers, spelunkers, ice climbers, hang gliders and other recreational risk-takers.

While working at the Pentagon, Thor and several colleagues developed the idea to consult for the NFL. Once, while waiting for data to come in on special operations candidates, they began drawing parallels between soldiers in special operations and professional athletes. “Both of them are operating in these stressful conditions with a low margin of error, where you have to operate cohesively as a team and you have to deliver results,” Thor said.

In the 1990s, led by Thor’s colleague Robert Kilcullen, the group approached the Washington Redskins about analyzing players. After testing every player, two were flagged for delinquency and tendency to engage in poor behaviors. “We gave them the feedback, and they told us promptly that those were two of their best players in spring camp and not to call, but they would if they needed us,” Thor said.

The group left their experiments with the Redskins feeling rejected, but received a call two weeks later.

“They said one of those two people had put their star running back in the hospital because they got into a fight, and that he just lost it,” said Thor. The Redskins were sold on the consulting business, and the next year, the Philadelphia Eagles asked for their services. The following year, nearly the entire NFC East division took an interest. “Before we knew it, we were attending the NFL Scouting Combine, testing the student-athletes who were invited,” Thor said. “Now, 15 years later, I’ve gone to the combine 15 times.”

The consulting business assists about 20 NFL teams, looking for players who are able to study playbooks and memorize them, are willing to listen to coaches and apply feedback, and don’t feel the need to be the center of attention for every play. They combine those characteristics with measurements of each player’s physical abilities and tendency to engage in troublesome activities off the field. “Are you greedy? Do you have self-control? Can you delay gratification? Are you impulsive? What kind of temper do you have? All of these are things we have found cause people to make bad decisions off the field and get into fights,” Thor said.

Thor is proud of his work with the NFL. “There’s not a lot of people like us out there who have met everybody who plays in the NFL,” Thor said, “and I’ve had the opportunity to shake just about everybody’s hand.”

“I raise critically endangered tortoises to try to bring back populations that are on the verge of extinction,” he said. He’s also on the board of directors of the SPCA of Texas, an animal rights organization that throws fundraisers to benefit animals.

But whether it’s analyzing NFL players or raising tortoises, Thor stresses the importance of following a passion. “Weber State has given me a lot of skills and abilities, and I need to find ways of using them, not to just selfishly promote myself in my career, but to give back in a way that makes the world a better place,” he said.

And he has a message for current psychology students: “Don’t listen to people who tell you psychology is a difficult area to get into that doesn’t have a bright future,” Thor said. “I can’t tell you how many times people told me, ‘If you’re that good at math, why in the world would you go into psychology? That’s never going to give you a great future.’”

Working with the NFL and overseeing a team of 30 people at Flowserve, Thor continues to prove them wrong.