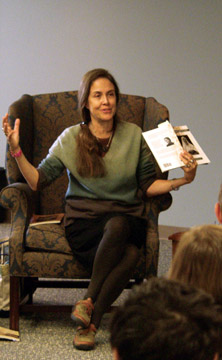 Naomi Shihab Nye describes herself as a "wandering poet." She has spent 33 years traveling the country and the world to lead writing workshops and inspiring students of all ages. Nye was born to a Palestinian father and an American mother and grew up in St. Louis, Jerusalem, and San Antonio. Drawing on her Palestinian-American heritage, the cultural diversity of her home in Texas, and her experiences traveling in Asia, Europe, Canada, Mexico, Central and South America and the Middle East, Nye uses her writing to attest to our shared humanity.

Naomi Shihab Nye is the author and/or editor of more than 20 volumes. Her books of poetry include 19 Varieties of Gazelle: Poems of the Middle East, A Maze Me: Poems for Girls, Red Suitcase, Words Under the Words, Fuel, and You & Yours (a best-selling poetry book of 2006). She is also the author of Mint Snowball (paragraphs), Never in a Hurry (essays), Habibi and Going Going (novels for young readers), and Baby Radar and Sitti’s Secrets (picture books). Other works include seven prize-winning poetry anthologies for young readers, including This Same Sky, The Space Between Our Footsteps: Poems & Paintings from the Middle East, and What Have You Lost? Her new book of essays is entitled I’ll Ask You Three Times, Are you Okay? Tales of Driving and Being Driven (2007).

Naomi Shihab Nye has been a Lannan Fellow, a Guggenheim Fellow, and a Witter Bynner Fellow (Library of Congress). She has received a Lavan Award from the Academy of American Poets, the Isabella Gardner Poetry Award, the Lee Bennett Hopkins Poetry Award, the Paterson Poetry Prize, four Pushcart Prizes, and numerous honors for her children’s literature, including two Jane Addams Children’s Book Awards. Her collection 19 Varieties of Gazelle was a finalist for the National Book Award. Her work has been presented on National Public Radio on A Prairie Home Companion and The Writer’s Almanac. She has been featured on two PBS poetry specials, "The Language of Life with Bill Moyers" and "The United States of Poetry," and has also appeared on NOW with Bill Moyers.

Read an interview with Naomi Shihab Nye published in this issue of Weber.

I wish I had never gone anywhere away from you
the years before you died. Had sat beside you
day after day, the way your cat did,
rumpling newspapers, through the softening light
and sorrowful newscasts. I should have given up
Michigan, Minnesota, New Mexico, places
that took me away, your voice petulant
on the phone—where are you going NOW?—
and the letter found after your death
in which you said—ha!—you didn’t
approve of women traveling so much.
Mom intercepted it, stuck it in her drawer.
Your constant requests for a single cube of ice,
fetched again and again from the freezer,
I gritted my teeth, bought smaller ice trays,
fanned away old worries circling your head,
you should have gone back to Palestine,
so much time wasted, why,
when you could still rise, without great effort,
and adjust your shirt and shoes, and walk
out of the room.