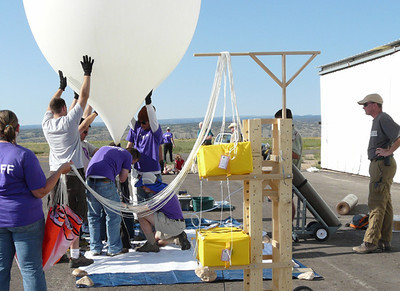 more than 1,000 hours researching and developing a robust, yet inexpensive, device that could help the scientific

campus and community. The symposium represents a broad cross section of departments and disciplines,

including science, health professions, social sciences, humanities and the arts.


The public was invited to attend the symposium, scheduled from 10 a.m. to 5 p.m. Oral presentations ran from 10

presentations were slated from 3 to 4 p.m. in the Shepherd Union Atrium. A complete schedule is available at


Petersen, an aerospace enthusiast, has been a member of WSU's High Altitude Reconnaissance Balloon for

weather balloon that travels to the edge of outer space, gathering scientific measurements from Earth's

atmosphere, such as air pressure and temperature, along the way. Since its maiden voyage in 2008, it has been

payloads above 99 percent of Earth's atmosphere -- quite literally at the edge of space," said John Sohl, HARBOR

attainable by aircraft (which fly too low) and spacecraft (which orbit too high). At mid-range altitudes, there is a

shortage -- and need of -- data for gas compositions and pollution levels.

measurements of atmospheric wind speed and direction. They don't, however, measure compositions. "The

electronics to measure what types of gases and aerosols are present are heavy and prohibitively expensive, and

there is always the risk that the equipment could be lost on descent," said Petersen, explaining that NOAA, for


Taking weight and affordability into consideration, Petersen, Mahurin and Stoddard worked alongside physics

majors on the HARBOR project to develop a small sensor board. The board has a set of sensors to measure

standard data, such as temperature, humidity and atmospheric pressure, but it also features the ability to add

additional instruments, such as gas and aerosol sensors. The board, which plugs into a $35 commercially

available computer, weighs only 40 grams (the weight of one small egg).


"Now that we have this new board that will support additional sensors, we are a step closer to one of HARBOR's

next goals -- to create the actual tool, the sensor, to measure gas and aerosol," Petersen said.


The board has accompanied four HARBOR flights. "As with most tests, there were challenges. There were issues

with wiring, batteries and water landings," Petersen said, "but we flew the new unit alongside an old unit and


For Petersen, this project presented numerous learning opportunities, and even opened the door to an internship

at a leading technology company.

for grants and manage a project," Petersen said. "For me, this has been the most productive academic activity I've

ever been involved in -- it has been a truly amazing experience."


Sohl explained that HARBOR is a goal-oriented, mission-based program styled after NASA flights. Students must

work in teams, with budget, time, mass and power limits. "It is a very 'real-world' experience for future scientists

and engineers," he said. "Industry employers generally prefer graduates who have hands-on experience,

especially in a teamwork-style project. Undergraduate research programs such as HARBOR give our students an

advantage in the job market."

regulatory institutions that will be beneficial to the long-term health and well-being of the world. He also hopes it

their skills to real-world problems -- "the big ones," he said, "like energy, environmental and human health, climate
change and food production."