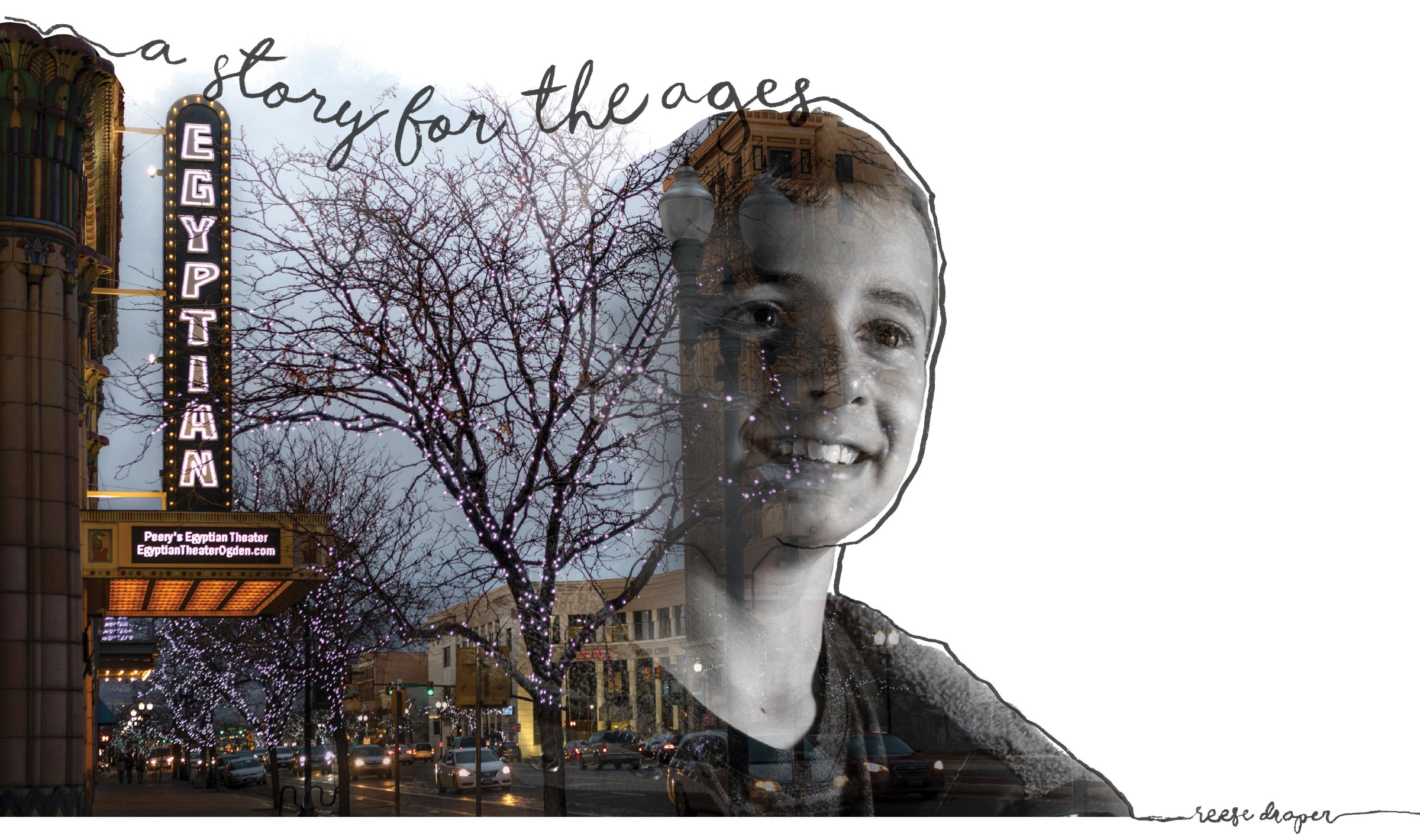 A Story for the Ages

Now a well-known regional storyteller with more than 25 years of experience, she earned her chops by spinning yarns as a volunteer at Salem Elementary in Utah County. And she had plenty to tell, inspired by places she lived and family who passed their stories down through the generations. Wing, who has lived in California, Hawaii, Wisconsin and Utah, still recalls the story her grandfather liked to tell about her grandmother feeding the family’s pig “a huge bottle of salt tablets.” 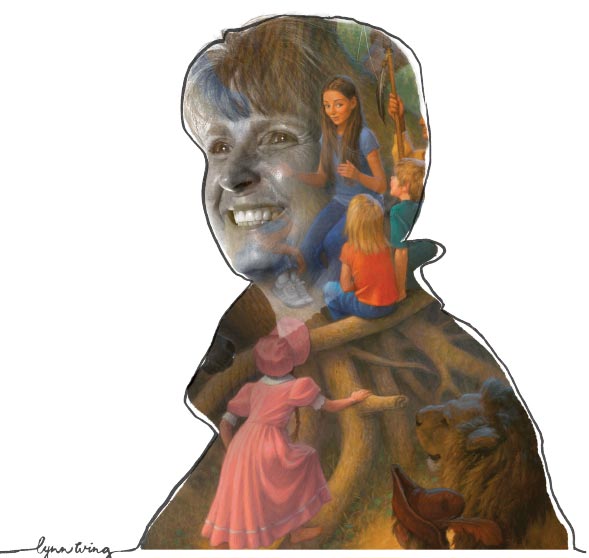 “Every week, I would go in and I would tell a story,” said Wing, who performed in the school library. “Every 20 minutes, they’d bring in a new class, and I’d be telling stories for about an hour and a half to two hours.” It didn’t take long for kids in just about every grade to remember her. “I would walk down the halls and hear ‘Hey, Mrs. Wing!’ ‘Hi, Mrs. Wing!’”

Wing’s love for storytelling runs deeper than the recognition it brings though. “We’re actually storytelling creatures. That’s how we communicate, really, all the time,” she said. “It just seemed a natural fit to be able to share all these stories.”

Celebrating its 25th year, Weber State’s Storytelling Festival features adult and youth storytellers, ranging from kindergartners to high school seniors. Typically held at Peery’s Egyptian Theater in Ogden, school districts send children by bus to attend, and special storytelling programs are held at area schools. “It’s so fun to tell stories to these busloads of children who are very excited about the whole prospect of being there and taking part in the storytelling,” Wing said.

Wing performed in it for the first time in 2015, and returned each year since. She will also be part of the 2021 festival.

WSU’s festival is the first festival in the nation to put national and youth storytellers on the same stage, said Karen Lofgren, former professor and founding festival chair.

Chloe Merrill, professor of child and family studies, former Boyd K. and Donna S. Packer Center for Family & Community Education director and longtime Storytelling Festival supporter, says local schools, foundations and donors help support the festival financially so it can stay free to the public. In addition, a fundraising dinner is typically held during the festival.

The 2021 festival, running Feb. 22 to March 18, will be held online due to the COVID-19 pandemic, with the theme Tales to Remember: 25 Stories in 25 Days. Throughout the festival, new links will go live on the festival website that will take users to recorded stories. David Byrd, Storytelling Festival chair and teacher education professor, says the fundraiser will go online as well, and guests will have access to exclusive online stories. While storytellers won’t visit schools this year, the program is still expanding its reach.

“This has turned into an outreach program across the country, across the world,” Byrd said. “It will be accessible to everybody.” Last year’s festival reached 5,000 people. While organizers don’t know how many will attend virtually this year, Byrd says the link to the festival is being shared to as many areas as possible.

Along with reaching more people, Byrd says another advantage to going online is the ease of archiving the recorded stories and providing them on social media and to teachers to show in their classrooms. “The big drawback is we can’t have quite as many tellers, and we won’t have quite as many sessions,” Byrd said. “Storytelling is a reactive event, so, recording the story, you also don’t see how the audience is reacting, and that will be a bit of a challenge for some of the tellers.”

Wing said storytellers need to take a different approach to their telling online. “You don’t have the energy of a live audience,” she said. “Rather than trying to present as if you’re presenting to an audience, it’s kind of scaled back on the performance, a little more personal. I am telling a story, and I’m telling it to you.”

Wing adds that one thing, however, definitely hasn’t changed. As she tells her stories, those who hear them can still picture them in their minds. “If we’re doing it correctly, they’re experiencing the story with us,” Wing said. “It’s a very dynamic artform.”

Motoko, a national storyteller at the 2021 festival who last attended in 2012, says she’s relieved that the festival wasn’t completely canceled due to COVID-19, and she has had to become comfortable with virtual storytelling over the course of the pandemic.

Luckily, her partner, storyteller Eshu Bumpus, is a “technical wizard,” she said.

“I’m beginning to find out that each story requires different types of visual enhancements,” she said. “My task now is to effectively digitally enhance my stories so they will be interesting — things you wouldn’t have to think about in an in-person performance.”

As she records her stories, she tries to imagine how her virtual audience will react. “If they are laughing, I must give them time to laugh,” she said.

Motoko graduated from International Christian University in Tokyo and attended University of Massachusetts as an exchange student. While in college, she learned to mime. “Because I’m a mime and very physical, I naturally try to move and engage my whole body,” she said. “But recorded stories or going live online confines you into this little rectangle, and it’s a little bit frustrating.” A solution, she discovered, is finding parts of her stories that call for the camera to move instead, offering different angles and zooming in and out.

At the festival, guests will see how Motoko and Bumpus have taken the reins in virtual storytelling, as she tells stories that include folktales from Japan and other areas in Asia.

She will be joined by fellow national storytellers Ed Stivender and Simon Brooks.

Stivender performed at WSU’s first Storytelling Festival and returned multiple times. Since 1980, he has performed all over the country and world and can say that Ogden’s Egyptian Theater is one of the most beautiful theaters he’s come across.

This year, however, like Motoko, he will go on screens instead of on stage.

Giving people a break from their troubles and concerns and helping them become immersed in stories is Stivender’s top goal, especially following a year like 2020.

“Performing for a webcam, which I’ll be doing in my studio, is very different than performing for an audience in front of me, especially the lovely, warm audiences in Ogden,” said Stivender, who also sees the bright side. “The fact it will perhaps reach a greater number is a positive thing, and I will do my best to give whoever is watching the break that I intend in my storytelling.”

He says it’s an honor to return again for the 25th anniversary. “Most storytelling festivals don’t make it to five years, but the fact that this is the silver anniversary of a wonderful festival is a great thing to celebrate,” he said.

Big crowds used to make Reese Draper a little nervous, but now that he’s a storyteller, his confidence has shot up like the giraffe’s neck in one of his favorite stories.

“I’m not as shy to speak in front of an entire crowd,” said Reese, a Riverdale Elementary fifth grader who was chosen as one of the youth storytellers at the 2021 WSU Storytelling Festival.

Festivalgoers might hear his story about how the giraffe got its long neck, tongue and legs, but they should also expect the unexpected. His favorite part of storytelling: “You can tell random things that pop into your mind, and they don’t have to make sense too much.”

His family also appreciates stories. Reese says that he enjoys listening to stories in the car with his grandmother, and his father likes to share memories from junior high and high school. Reese’s favorite school subject is language arts. At home, he enjoys playing with LEGOs and his dog, Tucker. While he just might become a nationally recognized storyteller someday, right now, mail carrier is one of the careers that intrigues him the most.

From Soggy Shoes to Success Story

The idea to hold the event outside at the Ogden campus, so festivalgoers could enjoy autumn as they listened to storytellers’ captivating tales, didn’t go quite as planned. “The night before, a water main broke on the lower campus, and that’s where all the tents were,” said Lofgren, chair of the first festival. “We went over the next morning, and everything was flooded.”

Most of the water was able to be removed, but the grass stayed soggy.

In addition, not many attended since they didn’t know what to expect, Lofgren said. She says it seems like about 150 guests came, a small crowd compared to thousands today.

Wet shoes and low attendance aside, Lofgren says WSU President Paul H. Thompson saw a future in the festival and didn’t want it to die after one year. The next year, the festival’s steering committee moved it indoors to Peery’s Egyptian Theater. The festival now holds events in Davis County and conducts outreach to local schools as well.

Lofgren says the festival’s steering committee, a diverse group of volunteers who help plan and run the festival, has been its key to success. “The success you see today is because of that original storytelling committee that had the vision,” she said.

Ann Ellis, retired WSU teacher education professor, former festival chair for eight years and steering committee member since the beginning, says another reason the festival has lasted 25 years is its focus on children. “From the very beginning, we worked out a way for children to be active storytellers on stage during the festival,” Ellis said. “It’s turned our festival into an internationally recognized event, particularly because of the children who tell the stories.”

Ellis says the festival also has a unifying power for all ages.

“We wanted it to be a broad community event, and we wanted to reflect the culture of the community,” she said. To help accomplish that goal, storytellers representing a broad range of backgrounds, including bilingual storytellers, are brought in every year.

“That’s one way we’ve been able to help people feel more unified,” she said. “Right now, in our country, I think we need a little more of that.”

Get Involved in Storytelling

Storytellers Motoko and Lynn Wing shared amazing stories with Wildcat that have been transcribed for you!

Have a fond memory from a past Storytelling Festival? Tell us about it at magazine@weber.edu.

Festival organizers hope to host the 2022 event in person, and they already need volunteers. To sign up, contact David Byrd at davidbyrd@weber.edu.