Running to Get Back on Track 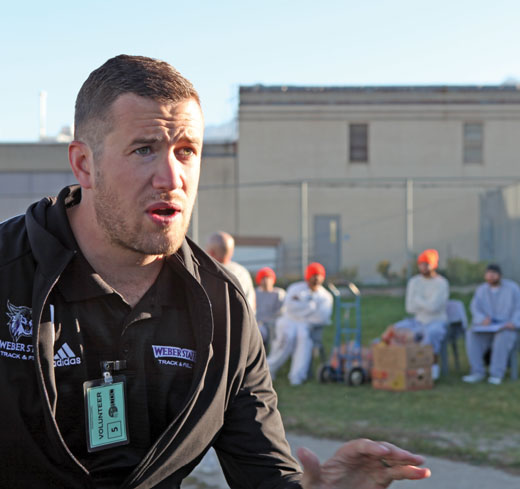 On a chilly October morning, 40 Utah State Prison inmates filed into the facility yard. Wearing tattered Reebok Classics and prison-issued shorts, the group gathered at the starting line of a thin dirt track where their coach — dressed in a Weber State Track & Field shirt and jacket, with a “Volunteer” ID clipped on his chest — stood waiting.

“There will be two commands: ‘Runners, take your mark,’ and then I’ll say ‘go,’” he announced, before sending them on their way, some to run a 10K, some a half-marathon, and some a full marathon.

As the hours ticked by, WSU assistant track and field coach Isaac Wood stood trackside, watching, encouraging and reflecting on how much these runners had improved since he first met them six months ago.

Last March, as outdoor track and field season was in full swing, Wood was going through his normal morning routine in his office at Stewart Stadium. He was sifting through his junk mail when he spotted a letter addressed “Attention Running Coach.” At first glance, it was a familiar sight. Wood regularly receives letters from parents and coaches of prospective high-school recruits looking for scholarship opportunities.

“Somehow the letter ended up in my box, and not in the head coach’s box,” Wood said. “But I’m also the recruiting coordinator, so I opened it, and it was a letter from an inmate at the Utah State Prison who described his love for running and how it has changed his life while serving time.”

The inmate, Jason Penney, claimed to have lost more than 80 pounds since picking up running. Now he needed help.

Not too many people get to walk into a room full of convicted felons with just a guard next to you. Who wouldn’t be scared?

After convincing prison administrators to allow a running event inside the fences of the Wasatch Facility yard, Penney organized a handful of races, including marathons, half-marathons and 10K runs, throughout 2013. With participation increasing at each race, Penney was looking for a volunteer to help coach and mentor a small group of runners for another event in October 2015.

“The men taking up the challenge of distance running do not fit the stereotypical profile of a convicted felon,” wrote Penney. “We have all chosen running as our avenue to recovery. It has inspired each of us to elevate our lives.”

Wood, who has coached at WSU since 2014, was touched by Penney’s passionate inquiry. He saw a chance to help motivated individuals who were in need.

After getting the green light from WSU’s head coaches and from Utah State Prison authorities, Wood began organizing biweekly clinics in which he provided coaching expertise and personalized training schedules for more than 40 inmates. 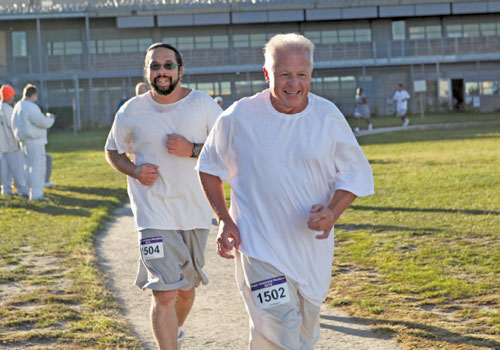 “The marathons they previously had were pretty unorganized, and Jason was looking for some guidance and training for a pretty solid group of guys that were running together,” Wood said. “Each time I went down there, I did a 30-minute clinic in a portable classroom before we’d move outside to train for an hour.”

Before the clinics began, Wood wasn’t sure what to expect. His first trip inside the barbed-wire fence was intimidating.

“Not too many people get to walk into a room full of convicted felons with just a guard next to you,” Wood said. “Who wouldn’t be scared? I arrived late because of bad traffic, and I had to use the restroom. There are no public restrooms in a prison, so a guard escorted me into the gym, where 80 inmates froze, turned and trained their eyes on me all at once. That was definitely startling.”

Despite Wood’s initial impression, the inmates couldn’t have been happier to have him there. Running on a small track right in front of the facility housing to the tune of heckling bystanders was challenging. Having an expert volunteer on hand to show them the ropes provided the confidence boost they needed.

“There have been many times in previous years when I’m out there all by myself, day after day, going around in little circles,” Penney said. “During the summer there was a lot of enthusiasm for the sport with more people coming out and giving it a shot, people that had previously been nervous about trying it without a mentor.”

The increased participation is positive, Penney said. “There’s definitely a mental health benefit to this. Depression and anxiety in this place are pretty common. Being able to set a goal and work toward it provides a different blueprint for how to live.” 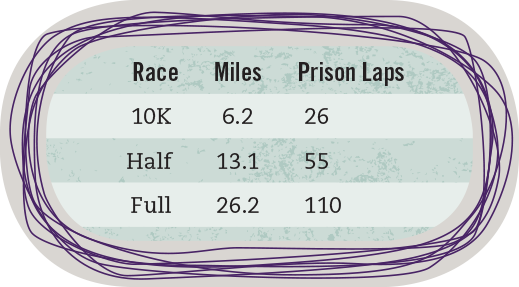 As the runners trickled across the makeshift finish line, they all had satisfied smiles when they received congratulatory high-fives from their coach.

Wood recognizes that he, too, has benefited from this experience. He would like to continue the clinics in future years if his schedule permits. In addition to coaching, Wood is also working toward an MBA in WSU’s John B. Goddard School of Business & Economics.

“I was expecting a lot of rough-looking characters, and people not really wanting to talk to me, and people trying to be real tough,” Wood said. “I couldn’t believe what it was like. The inmates are so humble and so thankful that I’m even there. I’m kind of a nobody, and the fact that these guys think I’m something, while I feel like I’m getting a great experience myself, is really touching.”