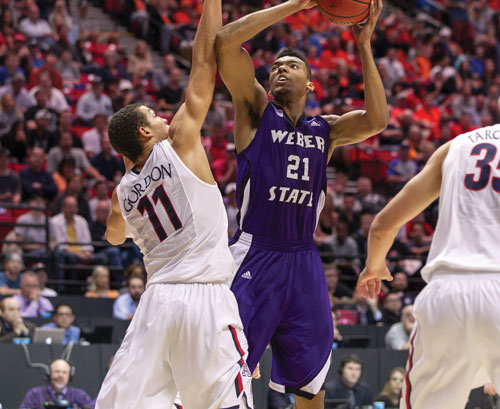 For the second time in five years, Weber State men’s basketball sent a player to the NBA when star forward Joel Bolomboy was selected No. 52 overall by the Utah Jazz in June’s NBA draft. Just three months removed from helping the Wildcats win the Big Sky Conference championship, the Big Sky MVP heard his name called in the second round by a professional franchise that is just 45 minutes down the road from Weber State.
Being so close to his home of the past four years comes as a pleasant surprise.
“It’s going to be real cool,” said Bolomboy, who the Jazz officially signed in August. “I’m always going to be in the gym watching (the Weber State team) practice, and when I have time, I’m going to come watch them play. I’ll be just down the road, so we’ll see each other a lot.”
Bolomboy follows WSU alumnus Damian Lillard BS ’15, who was drafted by the Portland Trailblazers in 2012. 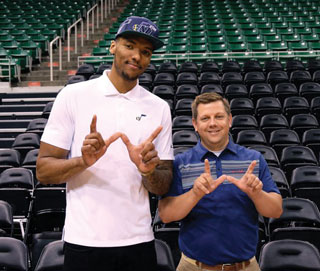 “I have something in common with Joel Bolomboy,” Steve Starks tweeted the day after the Utah Jazz selected Bolomboy in the second round of the NBA draft. Like Bolomboy, Starks, the president of the Utah Jazz and Larry H. Miller Sports & Entertainment Group, is also a WSU alumnus. Starks served as student body president and graduated in 2003 with a Bachelor of Integrated Studies degree.