Accounting: It’s not just debits and credits anymore (actually, it never was)

by David Malone, professor of accounting

One of my favorite stories in financial accounting classes begins by asking students, “What happened in 1492?” If you just mouthed the words, “Columbus sailed the ocean blue,” you would not be alone. My response goes something like, “Well, true enough; however, that was obviously dwarfed by an obviously much more significant event.” Silence. “You know, two years later, Luca Pacioli wrote Summa de Arithmetica, Geometria, Proportioni et Proportionalita.” Or, generally translated, “Everything you wanted to know about math, geometry, and fractions.”

Luca (not coincidentally, my dog’s name) was a Franciscan friar and mathematician. He included an appendix to his treatise describing the “double entry bookkeeping system” — that for every asset there must be a general claim to that asset. In other words, Assets = Equities. Luca, though, was not the originator of that system. Instead, he was simply describing one of the several methods of accounting in use by enterprises at the time. Gutenberg’s, recently developed, movable type allowed the dissemination of the Summa across Europe and resulted in a broad adoption of the method Pacioli described. Interesting, too, is the question of why debits and credits were used and not simply positive and negative balances. The answer: negative numbers were not broadly understood as a concept in Europe until late in the 15th century. So now, 500 years later, we are still stuck, generally, with the debit/credit system of accounts rather than simply using positive and negative balances – something that to us in the 21st century is second nature.

My purpose in telling this story is to point to the artificiality of the concept many hold of what an accountant is or what he/she does. Fortunately, the old stereotypes of the pocket protectors and green eye shades are a vague memory now, thanks to the increased automation of bookkeeping tasks.

“So what,” I ask, “does an accountant do?” And ultimately, the answer to that question, is that we are tasked with measuring stuff that is inherently difficult to measure. Profit, for example. Sure, revenues less expenses is the rote answer; however, how does one measure those elements? Have you ever wondered why we don’t subtract dividends from profit, but do subtract interest expense? (Okay, probably not, unless you had me for a class.) Those two “costs” are surprisingly similar when scrutinized — both are returns on equity investments, one a return to owner equity holders and the other a return to debt equity holders. The answer is that our convention — rule, if you will — for measuring profit for financial purposes is to report income to owner equity investors (i.e., those investors who have common or preferred stock interests in the company.) If, for example, we chose to report income to common equity holders, we would reduce income by any preferred dividends that were paid out during the period.

A seemingly simple thing, even, such as depreciation, turns out to be harder than it looks. I will ask the class, “What is depreciation?” Again, if you silently mouthed something like “The reduction in value of an asset,” you would not be alone. Just to be contentious, I respond, “No! It’s the systematic allocation of cost over the life of an asset,” which is true — for financial accounting. I’ll beg off the economist’s version of depreciation, since I’m guessing very few of you are interested in discussing the time value of money.

At the end of the day, what an accountant does is provide measures of economic events that assist decision makers in making decisions regarding investments, inventory levels, risk, social responsibility, etc. That’s right —

I snuck that last one in there. There are stakeholders who are very interested in social responsibility (in its many forms) and whose decisions on whether to invest in, buy from, partner with or generally be supportive of a firm can usefully be informed by such information as employee satisfaction, carbon emission levels, offshore outsourcing, etc. Take a look at the websites of any publicly traded firm. In addition to links to traditional financial data, you’ll find links to relevant public interest data (e.g., fleet emission levels for auto manufacturers.) While accountants generally aren’t responsible for constructing much of that information, they are certainly responsible for assembling information that assists any stakeholder in making informed decisions related to interactions with that firm.

So, when someone insists that accountants have jobs roughly as interesting as break press calibration technicians (just made that up,) remind them the role of the accountant, in fact, is to provide all stakeholders relevant information about the firms they want to work for, invest in, buy from or sell to. It’s more than just Luca Pacioli’s debits and credits. 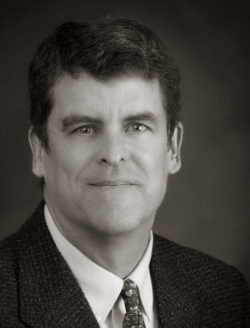 Malone’s current research interests are accounting for environmental sustainability and target costing. He has published in a wide variety of journals on topics ranging from financial reporting to corporate social responsibility to accounting information systems. He has served as chair of the Trueblood Seminars Committee of the American Accounting Association, sponsored by the Deloitte & Touche Foundation. He is currently active as a member of and participant in the Consortium for Advanced Management – International, working with their Environmental Sustainability Interest Group.