About the Val A. Browning Center for the Performing Arts

“Providing an environment for faculty & students to excel in the performing arts.” 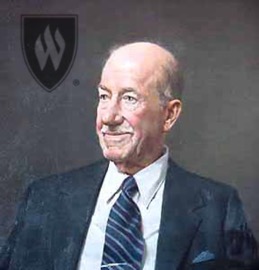 As an industrialist, Val A. Browning made his fortune in his family’s firearm business. His passion for the arts and education, combined with a generous philanthropic spirit, contributed immensely to the cultural, social and economic development of Utah.

Born in Ogden on Aug. 20, 1895, Browning loved to play musical instruments. He graduated from Ogden High School in 1913; later studying engineering and law at Cornell University. During World War I, he instructed U.S. Army troops on the use of Browning machine guns and automatic rifles. In 1920, he became manager of the Browning Arms factory in Belgium. While in Europe, he attended operas and symphonies whenever he could. In 1935, he returned to Utah to become president of the Browning Arms Company. In 1967 he was awarded an honorary Doctor of Science degree from Weber State College.

His profound commitment to the arts was instrumental in the development of facilities and program offerings at the Val A. Browning Center. His donations began with $1,800 to fund a convocation series. Contributions grew increasingly generous, including funds to purchase a Bossendorfer piano first used during a performance of the Vienna Symphony; an Allen Digital Computer Grand Concert Organ and a sound system.

In 1978, Mr. Browning gave one million dollars to establish a trust fund that would enable the university to bring world-renowned performers to the community. In that same year, the College Fine Arts Center was renamed the Val A. Browning Center for the Performing Arts in honor of his tremendous support. Contributions have continued over the years, with the Val A. Browning Foundation contributing another one million dollars toward the building’s latest renovation. Even after his death, Mr. Browning’s influence continues to touch lives and promote the arts.

Timeline of the Val A. Browning Center

1978: Donation of one million dollars from Mr. Browning establishes a trust fund administered by Office of Cultural Affairs to draw world-renowned artists to perform in the building.

1978: Weber State University renames the building in honor of Val A. Browning.

1985: Floor of Austad stage is replaced, resulting in its becoming the finest ballet performance area in the region.

1997: Building is closed for remodeling and expansion. Project brings center up to fire and seismic code and better meets the needs of students and community.

1999: Building reopens and is re-dedicated.