OGDEN, Utah — In celebration of the holiday season and science, Weber State University will host the Faraday Lectures in the Lind Lecture Hall Rooms 125-126, Dec. 21 and 22 at 7 p.m. 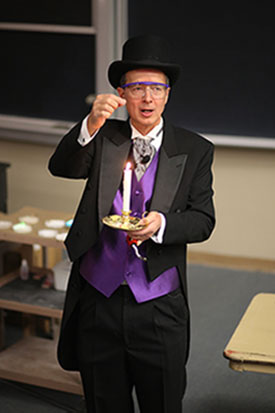 The Faraday Lectures pay homage to Michael Faraday, a renowned English scientist known for his contributions to electromagnetism and electrochemistry. Faraday hosted Christmas Lectures at The Royal Institution in London from 1825-61. WSU has continued the holiday tradition to entertain and educate both children and adults.

“Science is a critical component of a well-rounded education, but it’s also just plain fun,” Wight said. “The Faraday Lectures focus on the fun part of science.”

Wight, who will dress as Faraday in a top hat and tails, will demonstrate “The Chemical History of a Candle.”

“The Faraday Lectures will be packed full of exciting demonstrations in chemistry, presented in a light-hearted and entertaining way,” Campbell said. “The goals of the lecture are to have fun with chemistry and to spark the imaginations of the audience for chemistry and science.”

Curie, noted for her radiological work, became the first women to win a Nobel Prize in 1903. She shared that prize, which was in physics, with her husband Pierre Curie and the French physicist Henri Becquerel. 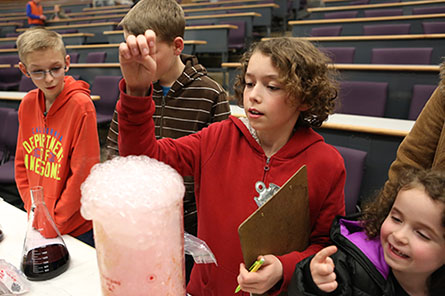 Lavoisier was instrumental in the success of her husband, Antoine Lavoisier, who discovered the Law of Conservation of Mass. After marrying in her early teens, she worked alongside her husband in the laboratory. She also contributed detailed drawings of scientific equipment to her husband’s publications.

At the Faraday Lectures the WSU chemistry trio will perform a variety of demonstrations. Some of the experiments will include the use of cryogenics, or very low temperatures, and combustion.

“I hope people will gain an appreciation for the understanding of the natural world through chemistry and science,” Paustenbaugh said.

The Faraday Lectures are free and open to the public. Seating is limited to auditorium capacity of 324.