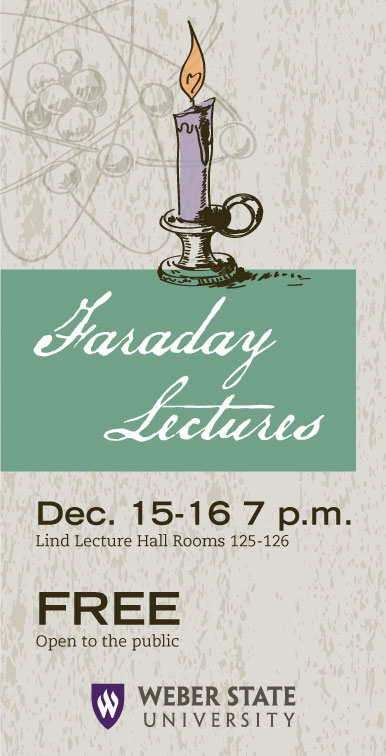 OGDEN, Utah – In celebration of the holiday season and science, Weber State University will host the Faraday Lectures on Dec. 15 and 16. WSU President Charles Wight, chemistry professor Michelle Paustenbaugh and chemistry instructor Carol Campbell will conduct several scientific demonstrations aimed at creating curiosity in children of all ages. The free lectures will take place on both dates at 7 p.m. in Lind Lecture Hall Rooms 125-126. Seating is limited to auditorium capacity of 324.

The Faraday Lectures pay homage to Michael Faraday, a renowned English scientist known for his contributions to electromagnetism and electrochemistry. Faraday began his Christmas Lectures in 1825 at The Royal Institution in London and continued the tradition until 1861.

Wight, who will dress as Faraday in top hat and tails, will demonstrate “The Chemical History of a Candle,” the last series of Faraday’s Christmas Lectures.

During their demonstrations, Paustenbaugh and Campbell will dress as science pioneers Marie Curie and Marie Lavoisier, respectively.

Lavoisier was instrumental in the success of her husband, Antoine Lavoisier, who discovered the Law of Conservation of Mass. After marrying in her early teens, she worked alongside her husband in the laboratory. She also contributed detailed drawings of Antoine Lavoisier’s scientific equipment to his publications.

Campbell said she wants to share the excitement of discovery that chemistry can instill.

“There’s always something new to learn!” she said.

The presenters will run through an array of demonstrations, including combustion and cryogenic, or low-temperature, demonstrations.

“I hope audience members rediscover their sense of wonder about the natural world and are inspired to learn more about why nature behaves as it does,” Paustenbaugh said.

Wight, who has participated in Faraday Lectures for about a decade, said attendees are sure to experience some scientific wonder.

“Science is a critical component of a well-rounded education, but it’s also just plain fun,” he said. “The Faraday Lectures focus on the fun part of science.”