OGDEN, Utah – Weber State University computer science professor Brian Rague has been named the 2016 John S. Hinckley Fellow, and WSU’s CAPES! Project has been honored with the Exemplary Collaboration Award. The awards will be presented at a luncheon Nov. 18 at 12:30 p.m. in the Shepherd Union Ballroom.

Before WSU graduate Tina Van Riper met computer science professor Brian Rague, she was a single mom without a high school degree, working a dead-end job and taking night classes. She credits Rague with helping her learn and pushing her academically as she studied computer science. Today, she is a successful software engineer for Davis County.

“Dr. Brian Rague is a person who is deeply committed to education as his work in the computer science department attests,” Van Riper wrote in her nomination letter. “In all circumstances, he was helpful and provided excellent guidance. He was easy to approach and welcomed the chance to help anyone who was willing to ask and willing to put forth the effort.”

Rague’s current area of study is software engineering, parallel computing and programming languages. He also explores opportunities for creative software engineering in the fields of education, biomedicine and physics. Rague established the WSU Computer Literacy Center, where students receive individual help with computational literacy so they can succeed in classes, academic research and the workplace. He sought input, authored and championed the proposal for the Master of Science in Computer Engineering, which is the College of Engineering, Applied Science & Technology’s (EAST) first graduate degree.

“Every year the Hinckley selection committee confronts a major challenge: several deserving nominees, only one award,” said Madonne Miner, provost and vice president of Academic Affairs. “This year was no exception. But members agreed that Dr. Rague stood out because of his dedication and success in areas reflected in the Hinckley Award: teaching, service and research. One of the committee members remarked that the Hinckley Award ‘sends a message about what the university values,’ and all agreed that Brian Rague was the perfect messenger.”

Rague is an active scholar, having presented at approximately 50 local, regional, national and international conferences. He has written or co-authored more than 30 articles.

The Stewart Education Foundation awarded Rague a $100,000 grant to establish the Computer Science Simulation Lab, a state-of-the-art facility to investigate and research augmented and virtual-reality systems. He has served on various committees at the university and worked to involve the community in computer science.

“One of Dr. Rague’s interests has been increasing participation of underrepresented populations such as women and minorities in the computing sciences,” wrote Allyson Saunders, assistant dean of EAST, in her nomination letter.

Since 1991, the Hinckley Award has been bestowed upon a member of the WSU faculty who has excelled in teaching, scholarship and service. The award is named in honor of Ogden businessman and WSU supporter John S. Hinckley, who died in 1990. 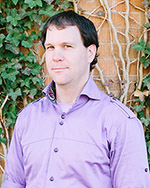 James Zagrodnik, assistant professor of health promotion and human performance, along with Natalie Allen Williams, associate professor of teacher education, organized the Children’s Adaptive Physical Education Society! (CAPES!) in 2013 to positively influence children with disabilities. For their work, they were honored with the Exemplary Collaboration Award.

CAPES! uses a combination of exercises and games in and out of the swimming pool to help children, ages 5 to 12, with their social interaction, balance, dexterity, motor skills, strength and fitness. Zagrodnik chose the acronym CAPES! because he wanted the children to think of themselves as superheroes who wear capes and perform amazing feats of daring and dexterity.

Zagrodnik decided to turn his own feelings of insecurity and isolation into a positive aquatic educational experience for children with disabilities after growing up with severe dyslexia and being unable to speak until age 10. He knows what it feels like to be isolated and stereotyped.

“With my learning disability and my inability to communicate, I was the kid in the corner without great social connections,” Zagrodnik said. “It was tough for me growing up.”

Because of his childhood experiences, Zagrodnik, who had always excelled in athletics despite his other struggles, found a way to turn his passion for sports into a successful academic and professional career studying motor behavior — how the brain and the muscles talk to each other to learn and perform skills.

WSU students in various WSU classes have the opportunity to develop individualized instruction and work one on one with each CAPES! class member.

“Reading nomination materials for the project, I was especially impressed by the life-changing effects of CAPES!” Miner said. “Children, parents and the students who participate in the project express tremendous gratitude for the opportunities provided to them to work together. Award winners James Zagrodnik and Natalie Williams have made a sustained commitment to this project, to the Weber State community and the community at large.”