OGDEN, Utah — A new solar installation at Weber State University Davis (2750 University Park Blvd., Layton) is expected to generate up to 100 percent of the campus’ electrical power needs. University officials will flip a giant switch to symbollically turn on the solar field during an opening reception, Nov. 11 at 3:30 p.m. 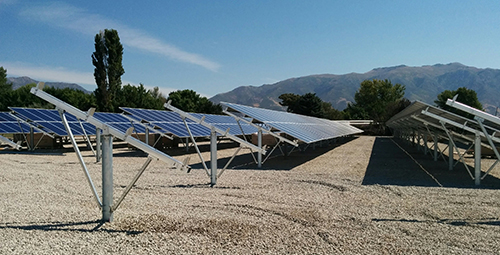 Solar panels now cover nearly seven acres of land on the southeast side of the campus. The solar area is enclosed by a black mesh fence and lined with rows of ground-mounted solar panels.

Jacob Cain, WSU director of operations, said the area is a prime location for a solar site. “It’s got a gentle southern slope and minimal shading,” Cain explained. “It’s about as good as they come.”

This project is one of the largest solar installations at a public institution in Utah. The approximately 2 megawatt solar array – financed, designed, installed and maintained by SolarCity, the nation’s leading solar provider – is expected to produce enough energy to power the equivalent of more than 250 homes for one year and will provide predictable and stable power for at least the next 20 years. The system is expected to generate more than 57 million kilowatt-hours of energy over its lifetime and offset more than 85 million pounds of carbon emissions.

The project is part of WSU’s larger effort to become a carbon-neutral campus by 2050. To reach this goal, WSU is reducing its use of fossil fuels and switching to electric energy that can produced through renewable sources such as solar, geothermal or wind. WSU’s newly constructed buildings, including the Tracy Hall Science Center, and its renovated buildings, such as the Stewart Library, Miller Administration Building and Wattis Business Building, are being outfitted as electric-only facilities.

“WSU has implemented a number of energy efficiency projects that have cut the university’s direct carbon footprint by more than one third,” said Jennifer Bodine, sustainability coordinator for WSU’s Energy & Sustainability Office. “The Davis solar project, which will provide virtually all of the electricity needed for the Davis campus, is a major milestone in WSU’s journey to become carbon neutral.”

In addition to the environmental benefits, switching to renewable energy and energy efficient technologies also means significant financial savings. In fiscal year 2016, WSU saved $1,785,785 in water and energy costs from its sustainability practices. Since 2009, WSU has saved $7,911,414.

WSU’s commitment to solar energy extends even beyond campus. In 2015, WSU partnered with Utah Clean Energy to launch the Susie Hulet Community Solar Program. This program has educated the community on the benefits of solar energy and made installing solar simple and affordable. Through the program, community members installed more than 2,500 solar panels on more than 140 homes in Davis, Morgan and Weber counties.