OGDEN, Utah — Weber State University will host a series of events throughout November in honor of Native History Month, culminating with the 11th Annual Native Symposium on Nov. 10.

The theme for this year’s Native Symposium is "Reconciliation After Appropriation: Healing Conversations with Indigenous People.” The symposium will begin with a 7 a.m. sunrise ceremony near the flagpoles west of the Val A. Browning Center.

Darryl Tonemah, a psychologist and full-blooded Native American of Kiowa, Comanche and Tuscarora heritage, will deliver the keynote speech in the Shepherd Union Wildcat Theater at 9 a.m. 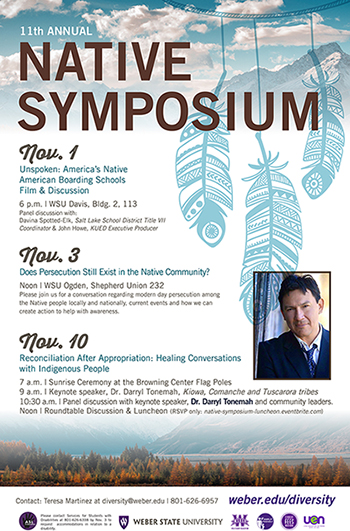 Following the keynote speech, a panel discussion will take place in the Shepherd Union Wildcat Theater at 10:30 a.m.

A facilitated round-table discussion and luncheon in the Shepherd Union Ballroom will be held at noon. The luncheon is free and open to the public, but those attending are asked to RSVP at native-symposium-luncheon.eventbrite.com.

“We have a historical problem of not accepting responsibility for our actions in the moment and, to some extent, ever,” said Adrienne Gillespie Andrews, WSU chief diversity officer. “However, as we witness the increased turmoil around ethnic and racial identity in this nation, it becomes more critical than ever to admit the errors of our ways, to seek forgiveness and to reconcile in meaningful ways. I am hopeful that we can become a part of this national conversation with a particular focus on Native people.”

Native History Month events will begin on Nov. 1 with a film screening and discussion of “Unspoken: America’s Native American Boarding Schools” held at Weber State University Davis Building 2 Room 113 at 6 p.m. The movie tells the story of Native Americans stripped of their culture in boarding schools throughout the U.S. A panel discussion featuring John Howe, executive producer at KUED and Davina Spotted-Elk, the Title VII coordinator for the Salt Lake School District, will follow the screening.

A discussion titled “Does Persecution Still Exist in the Native Community?” will be held in the Shepherd Union Room 232, Nov. 3 at noon.