Historian at WSU to Reveal Stories of the Forgotten ‘Utah War’

OGDEN, Utah — Author and historian William MacKinnon will discuss forgotten stories of the forgotten Utah war, the confrontation in the 1850s between Mormons living in the Utah Territory and the U.S. government.

The public is invited to the free presentation, “A Sixty-Year Hitch with the Utah War: Surprises and Conclusions,” on Nov. 7 at 7 p.m. in Weber State University’s Hurst Center Dumke Legacy Hall.

“William MacKinnon is the foremost authority on the Utah War, also called the Utah Expedition or Johnston’s Army,” said Eric Swedin, WSU history professor. “His newest book and presentation complete six decades of research. We are thrilled he is speaking to the Weber Historical Society.” 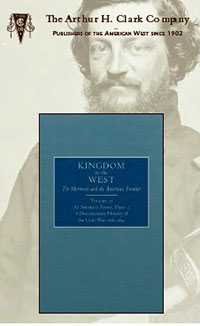 Most people know little to nothing about the Utah War, according to Swedin. The war was rooted in a power struggle between U.S. President James Buchanan and Brigham Young, the first governor of the Utah Territory. In the spring of 1857, Buchanan appointed a non-Mormon territorial governor, replacing Young through a large army expedition. According to MacKinnon, this was the most extensive and expensive American military undertaking in the period between the Mexican-American War and the Civil War.

MacKinnon has spent 60 years investigating and studying the Utah War. His research is documented in a two-part book “At Sword’s Point,” which is an in-depth narrative and documentary history of the conflict.

MacKinnon hunted for documents and followed paper trails to uncover stories of the Utah War. The task was not easy, as he wrote, “History often bypasses the Utah War and focuses on the immediately following American Civil War.” As a result, some details of the war are obscure and hard to find.

His final product is a comprehensive account of the war that includes the voices of military members and civilians, including the women left behind. MacKinnon’s work also revealed the war was significantly bloodier than previously believed.