OGDEN, Utah – Hikers exploring the foothills above Weber State University can learn much more about the area’s distinctive natural setting thanks to geosciences alumni, WSU faculty and local volunteers. The group designed and installed a series of informational signs along the 1.5 miles of the WSU Discovery Loop, which is part of the Weber Trails Network.

The community is invited to the Discovery Loop ribbon cutting Oct. 8 at 9 a.m., followed by guided science hikes until noon. The event will be held at 3990 Skyline Drive, known as the Par Course parking lot, east of Stewart Stadium.

Weber State President Charles A. Wight and Ogden Mayor Mike Caldwell will participate in a short ceremony to mark an occasion made possible with the combined work of WSU, the Ogden Trails Network and Weber Pathways.

“The Discovery Loop represents a truly collaborative effort with WSU’s College of Science, its Center for Science and Math Education, citizens who represent Ogden City and the Ogden Trails Network,” said Dave Matty, dean of the college. “We are excited about the potential to help local teachers, students and the public learn more about our amazing natural setting and its history.”

WSU Discovery Loop has two trails, both of which are easy climbs, although the outer loop along the top of Strong’s Canyon is a bit more difficult because of some steep areas. The trails have been accessible for the past two years, but 25 newly installed interpretive signs complete the project. The idea for a WSU trail section began in 2010 when Sara Yearsley and Amanda Gentry, who were then geosciences students in the WSU College of Science, were guiding community science hikes in the area.

The hikes were so popular that faculty and students from multiple disciplines in the college began conducting hikes, each focused on individual aspects of science. The series was called Yikes! Science Hikes!

Weber State and Ogden City officials soon agreed to partner to create the WSU Discovery Loop on 60 acres of land owned by the university in the foothills east of campus. In 2013 the project received a grant from Weber County R.A.M.P. (recreation, arts, museums and parks), and construction began. 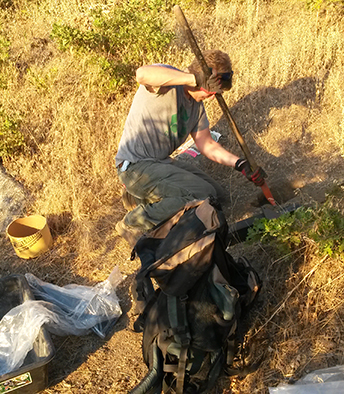 “The meetings we held, the hikes we took and the people we spoke with helped paint a picture of wildlife on the mountain, the geologic imprint of ancient landslides and the vast natural resources found above WSU,” Yearsley said. “We quite literally began to imagine a world waiting to be discovered and explored, so we named this trail the WSU Discovery Loop.”

By spring 2014, trail construction was complete and local hikers began to enjoy the hikes and views. The new interpretive signs will enhance the experience by telling stories that add meaning and interest to the hikes. The signs help visitors see the animals, insects, vegetation and geology of the area with a new set of eyes.

“Every person involved in donating the thousands of hours required to complete this project — from Weber State, Ogden Trails Network and the Natural History Museum of Utah, were committed to the same effort: bringing forth science to the community,” Gentry said.

The trails will be maintained by Ogden Trails Network volunteers and accessible to the public year-round.

“All a hiker needs to enjoy the experience is an open mind, fresh curiosity for the area around them and their five senses,” Yearsley said.