The community is invited to explore the four-story, 189,544-square-foot building during the grand opening planned Aug. 24. Dignitaries will cut the ribbon at 2 p.m., followed by self-guided tours from 2:30-5:30 p.m. Charles A. Wight, the university’s president and a physical chemist, will join science faculty who will conduct fun experiments and offer interactive demonstrations. Visitors will also enjoy science souvenirs and light refreshments. 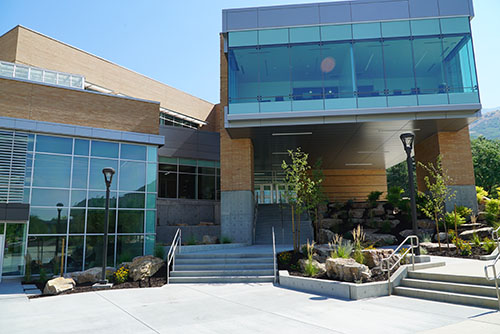 “Within the walls of the Tracy Hall Science Center, generations of students will discover the excitement of science and elegance of mathematics,” Wight said. “The facility’s thoughtful planning, design and construction contain a spirit of innovation that will continually inspire our campus community.”

Building construction began June 2014 and took two years to complete at a cost of $60,217,917. Additional research equipment, furnishings and technology brought the total expense to $77,003,305. The Utah Legislature appropriated $60.9 million, and the rest of the money came from a combination of university funds and donor contributions.

The largest donation was made in honor of H. Tracy Hall for whom the building is named. He received his associate’s degree from Weber College and went on to earn a Ph.D. in chemistry. As a young scientist at General Electric, Hall pioneered the process of manufacturing synthetic diamonds.

The inventor, who died in 2008, carried the name of both sides of his family: Tracy and Hall. The Tracy family settled in the Ogden area in 1851. They encouraged their children to become educated and use that education to serve others. Aaron Tracy served as one of the first WSU presidents from 1922-35.

The Hall family came to Ogden as railroad workers in 1892. Howard Hall married Florence Tracy in 1918, and their five sons benefitted significantly from their Weber College education. Their oldest son, Tracy, graduated from Ogden High and started attending Weber in 1937 — a beneficiary of a work-for-tuition program the school offered.

Both families have enjoyed a long legacy supporting WSU and believe Tracy Hall would be proud of the possibility and promise the building affords students.

“My hope is that students often say, ‘Let’s go meet at Tracy Hall,’” said Hall’s son, David. “Students can meet, communicate, debate and learn things that are hard — tough subjects that challenge people — subjects that lead to jobs by which they can then start productive lives.”

As with all new construction on campus, the building is environmentally friendly — and one of the most energy-efficient. Sunshine pours through glass windows and walls in classrooms and labs. Everyone who enters the building will see science in action.

In addition, the building’s architects collaborated with faculty, staff and students to incorporate the wonder of Utah’s landscape in the design. The exterior wall on the east side of the science center curves to reflect the curve of the Wasatch Range that surrounds campus. Located throughout is original artwork by Michael Singer. In his “Pattern Formations,” abstract circles, based on patterns found in nature and math, are created and cast in materials like concrete, steel, aluminum or resin mixed with copper and salt to fabricate different patinas.

The water source for the Copper Slide, the atrium’s towering art installation, is rainwater (or melting snow) from the building’s roof. The flow intentionally stops when water is unavailable. The wood, stone and copper throughout the building reflect the passion the campus community has for the beauty of northern Utah.

“The Tracy Hall Science Center is a jewel at the heart of campus,” said Mark Halverson, associate vice president for facilities and campus planning. “We situated this building purposely, so students walk through it from parking lots to the center of campus. Tracy Hall is open, welcoming, friendly and gets everyone excited about science.”

Nearly all WSU students will take classes in the Tracy Hall Science Center, either as science majors or to complete general education requirements.

“It is well known that science, technology, engineering and mathematics (STEM) fields really are economic drivers across the nation and in Utah,” said Dave Matty, dean of the College of Science. “In fact, the facilities in the Tracy Hall Science Center are already attracting outstanding new faculty, whose research expertise can help local industries, in addition to dedicated students who will be better prepared to enter the workforce. In this regard, the new building is already contributing to the future economic growth of northern Utah.”

Surprises in the building include an 8-ton, solid stainless steel, diamond press base in the lobby, and patterns in the exterior brickwork that represent different aspects of science. For example, the northwest tower has DNA code that spells words students will decode as homework.

“We saw an opportunity where the donors and the legislature would step up and make this magnificent building possible,” said Alan Hall, Tracy’s nephew and chairman of WSU’s Board of Trustees. “That’s what Tracy did. He took things that were old and made things that were new and beautiful. In that fashion, the building exemplifies the man himself.” 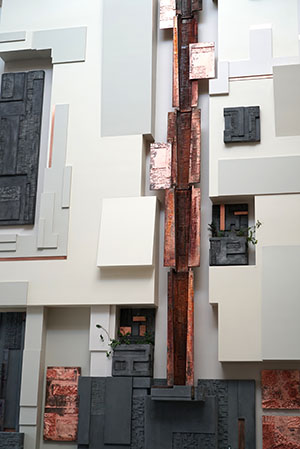