NASA, WSU and the Eclipse: A Video Project of Cosmic Proportions

OGDEN, Utah – Weber State University’s physics faculty and students are part of a national effort to take a high-altitude look at the upcoming solar eclipse.

NASA has funded the physics department's High Altitude Reconnaissance Balloon for Outreach and Research (HARBOR) team to capture video images from the stratosphere and to measure the atmosphere during the Aug. 21 eclipse. Professor John Sohl has plans in place to document the event with the help of his students. 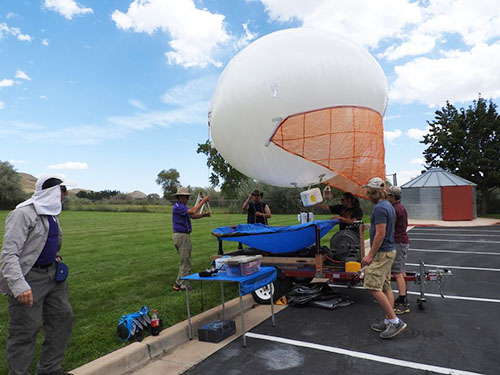 In addition, WSU is working with Salt Lake County’s Clark Planetarium to produce the video for global distribution to planetariums.

“High altitude research balloon teams from around the nation are staging along the eclipse path to help make this one of the most carefully studied total solar eclipses ever,” Sohl said. “Ozone will be especially interesting to measure since it is dependent on sunlight and goes through a normal daily cycle that might be impacted by the eclipse.”

According to Sohl, you don't need to be a scientist or engineer to enjoy this spectacle of the universe. However, those who watch must be careful to protect their eyes when any portion of the Sun's bright surface is visible. Eclipse glasses should be checked to make sure they are not scratched or have any flaws, such as tiny holes. However, one of the most important reminders to those watching the eclipse is to take the glasses off during totality -- the time, ranging from a few seconds to a couple of minutes, when the moon is completely covering the bright part of the sun. Totality is the only time to see the sun's enormous atmosphere called the corona. During totality, it will be safe to view without eye protection. Glasses should be restored the moment even a tiny bit of the bright part of the sun starts to appear. Utah will not experience totality. In Ogden, 93 percent of the sun will be covered.

“I'd like to point out that a partial solar eclipse, which will be visible in Utah, is not the same experience,” Sohl said. “Only during totality can you see the huge halo of million-degree hot gas around our Sun. If we are lucky, we'll even see solar flares along the edges with just our eyes. This is not possible even a few miles outside the path of a total solar eclipse.”

According to Sohl, for many people a total solar eclipse is highly emotional, and they become eclipse chasers traveling extensively to view other eclipses. He suggests anyone planning to view the total eclipse should plan ahead: bring plenty of food, water, a comfortable chair and something to read while waiting. Assume there will be massive traffic jams, so leave early and allow plenty of time for the drive home.

For photos, visit the following link: