OGDEN, Utah — Weber State University officials expect the class of 2015-16 to total more than 5,406 graduates. So far, 3,014 candidates have applied for spring graduation and will be honored April 29 during WSU’s 147th commencement. Others received their diplomas during winter commencement ceremonies. 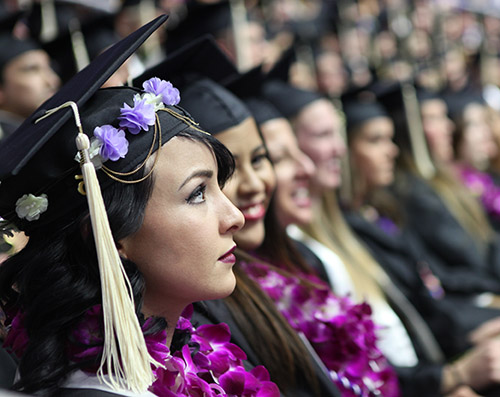 "Our graduates are ready for the challenges and opportunities that lie ahead," said WSU President Charles A. Wight. "Commencement is our opportunity to recognize their accomplishments and celebrate their success."

Graduates attending commencement in the Dee Events Center will receive a commemorative medallion to mark the occasion. The ceremony’s academic processional begins at 8 a.m., followed by the formal program and keynote address.

David Hall, an accomplished innovator and leader with more than 850 granted and pending patents to his name, will deliver the keynote address and receive an honorary degree.

As president of Novatek, a modern Edison lab network dedicated to developing technologies that solve global issues, Hall has overseen a company that has created, patented, licensed and refined hundreds of innovations that have generated billions of dollars in revenue. Among the features of the company’s labs are a 24-hour manufacturing facility, world-class machine shop, custom electronics department and a team of intellectual property professionals. Novatek operates under the belief that innovation will continue to solve problems and is turning its focus to creating systems needed for a clean, sustainable planet.

In addition to Hall, three others will receive honorary degrees: Kathryn Lindquist, a philanthropic leader whose life has been dedicated to a passion for and pursuit of education; George Hall, a leader of Ogden’s third-generation family business, the Elliot-Hall Company; and Weber State alumna Vickie McCall, a northern Utah businesswoman and realtor who has dedicated much of her life to supporting the military and national defense in Utah and beyond.

The 2016 Brady Presidential Distinguished Professors also will be honored during the ceremony. This year’s recipients are John Mull, zoology professor, and Paul Schvaneveldt, chair of the Department of Child & Family Studies.

Tessa Diamond, an English teaching major, will be the student speaker. Diamond was involved with the WSU Student Association since her first day on campus, serving as the Leadership vice president, the Service vice president and chair of Clubs and Organizations.

Beginning at 10 a.m. April 29, each of WSU’s academic colleges will hold individual convocations at various locations, where graduates will walk across the stage to receive their diplomas.

Lunch will be served in the Shepherd Union Atrium from 11 a.m.-2 p.m. Each graduate received two complimentary tickets to the lunch at the time they picked up their caps and gowns. Additional tickets many be purchased for $11 at the Shepherd Union Information Desk.

“Putting Students Through,” a short program where graduates honor parents, spouses and friends who supported them, will be held April 28 in the Shepherd Union Ballroom at 4 p.m.

To watch commencement live, visit weber.edu/commencement. By May 6, the commencement ceremony can be downloaded on WSU’s YouTube channel at youtube.com/weberstateu.

Parking will be free throughout the day on April 29. Campus shuttle buses will run every five minutes from 7 a.m.-5:30 p.m. with stops on the east and west side of the Dee Events Center, Val A. Browning center, Stewart Library and McKay Education Building. American Sign Language services will be available at the Dee Events Center in Section S at the base of Portal 17. Students with special needs should contact the director of Services for Students with Disabilities, Don Guthrie at 801-626-6856.