OGDEN, Utah — When words and numbers fail to fully communicate an idea, visual art can fill in the gaps. Mike Vaughan, director of Weber State University’s Center for the Study of Poverty and Inequality, enlisted the help of art professor Kathleen “K” Stevenson to teach an honors class using art to help communicate social science challenges.

Students in the class Honors 2050, The Rich and the Rest of Us, spent spring semester digging into the issues of poverty and income inequality, and created an exhibit called “Mapping the difference; Making a difference” that will be on display in WSU’s Kimball Visual Arts Center Project 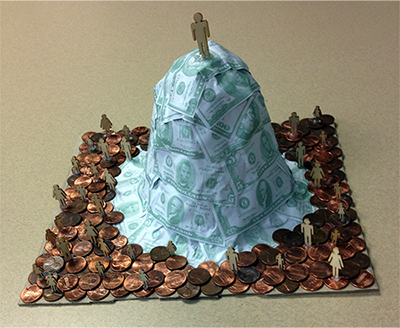 “We spent a significant amount of the course focusing on quantitative data,” Vaughan said, “but numbers don’t resonate with some people, and visual imagery is a different way to communicate the message.”

Vaughan used an example from the Great Depression to show his students the importance of visual imagery. Under Franklin Roosevelt’s New Deal, the Farm Security Administration took thousands of photographs to communicate the impact of the Depression.

“They knew statistics would resonate with some people, but not with other people,” Vaughan said. “So, they wanted an alternative way to communicate. Some of those photographs taken are still very famous today.”

Stevenson helped the students focus on ways in which art can be used as a “change agent” by bringing awareness and attention to issues.

The students created artwork to represent an aspect or concern related to poverty and income inequality. They were free to use whatever medium they wanted. Some students made sculptures with coins and paper money, while others used paper and pushpins to map areas with the highest and lowest concentration of poverty.

The students compiled their work in an exhibit they hope 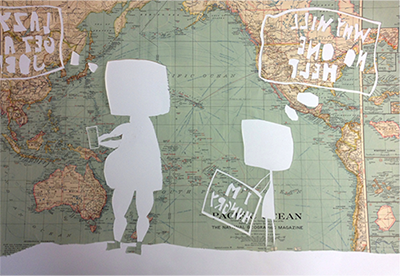 will highlight the concerns and issues they’ve been studying. Each image displayed has an accompanying description and artist’s statement.

“We see more than 4,000 visual images a day,” Stevenson said. “We’re an incredibly visual, literate culture. As artists, we have a social responsibility to consider what we can do with our art. It’s not always just art for art’s sake.”

“Art gives us a way to make it a little less about just intellectualism and let it come from the heart,” Stevenson said. “We worked on visually translating information in such a way that it could become material for advocacy or awareness for the community.”

The Kimball Visual Arts Center is open Monday-Friday from 7-midnight and Saturday from 10 a.m.-6 p.m.

Mike Vaughan, Center for the Study of Poverty and Inequality director
801-626-7308 • mvaughan@weber.edu