OGDEN, Utah – The community is invited to help Weber State University celebrate its successful Dream 125 campaign, in which the university exceeded its goal to raise $125 million. Money raised will support student scholarships, provide faculty and staff with technology and training and enhance the campus with modern facilities.

Festivities begin in the Shepherd Union April 13 at 9 a.m. and culminate between 1 and 1:25 p.m. with a blast of confetti cannons, music, Waldo, the Spirit Squad and President Charles A. Wight’s announcement of campaign totals to this point.

“Weber State proudly acknowledges its role in propelling generations of bright students to promising futures,” Wight said. “For more than 125 years, we have supported students in making their dreams happen, and we look forward to continuing that support well into the future.”

The campaign will conclude officially June 30, 2016, which is the end of the fiscal year. 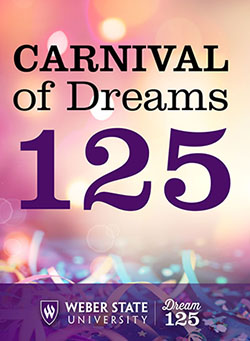 The campaign celebration is combined with the annual WSUSA Club Carnival, where the 220+ registered campus clubs and organizations will highlight their year of activities and recruit new students.

Carnival of Dreams 125 will begin at 10 a.m. in various locations throughout the union as well as around the Stewart Bell Tower Plaza. In addition to booths sponsored by the clubs and organizations, the carnival will include the popular creature encounters with snakes and insects, as well as aerialists, stilt walkers, airbrush tattoos, photo booths and free snacks, drinks and prizes.

Gregory Woodfield, WSUSA president elect and carnival organizer, said it’s an exciting time for students to celebrate the generosity of the many donors who helped make the campaign a success.

“We hope that students will see what others have done for them and make a commitment to support the university in the same way,” Woodfield said. “Generosity now and in the future will continue to make Weber State great, great, great.”

To learn more about Dream 125: The Campaign for Weber State, visit community.weber.edu/dream125.