OGDEN, Utah – Weber State University’s Engaged Learning Series will host the premiere screening of the documentary “NOT FOR RENT!” that examines the obstacles ex-felons face searching for housing after release from incarceration, April 5 from 12:30 to 2:30 p.m. in the Shepherd Union Wildcat Theater. The event and accompanying lunch are free, but seating is limited. Participants must register at notforrentfilm.com. 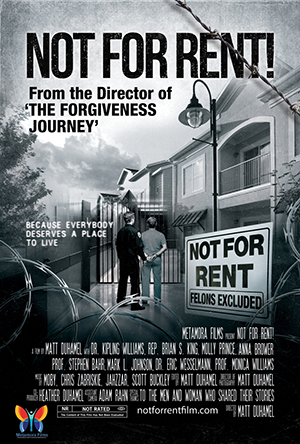 The film highlights several individuals with felony convictions as they discuss the stumbling blocks they’ve encountered attempting to find a place to live. Strict rental policies can affect individuals for decades. One subject of the film, Tonia, continues to struggle to find housing after a felony conviction almost 30 years ago.

Duhamel began producing “NOT FOR RENT!” in response to his own difficulties finding housing as an ex-felon.

“I know I’m not alone. Millions of ex-felons in this country, along with their families, are fighting for fair and adequate rental housing,” Duhamel said. “I wanted to produce a film that spoke to this issue that is rarely talked about.”

Monica Williams, WSU criminal justice assistant professor who is interviewed in the film, stresses the importance of stable housing for everyone in the community.

“Some cities have enacted ‘Good Landlord’ programs that bar landlords from renting to ex-felons,” Williams said. “This means that when individuals with a felony record get out of prison, they have a very hard time finding a place to live. Stable housing is very important for successful reintegration into society. Not having a place to live can increase a person’s chances of reoffending, so barring landlords from renting to ex-felons can actually decrease public safety.”

“The series has provided an avenue for discussion, reflection and action,” Williams said. The series has included documentaries, expert panels, shared stories, art exhibits and a number of other events to allow participants to critically examine and discuss privilege — a topic that is often ignored, but has major societal costs.”

For photos, visit the following links: