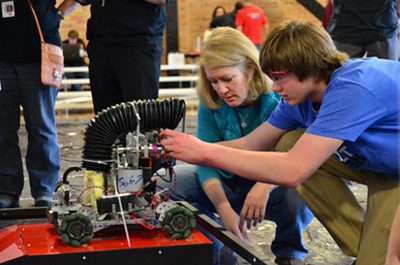 FTC is a robotics competition for students, ranging from seventh to 12th grades. Teams consist of as many as 10 students who design, build and program robots to complete certain prescribed tasks. This is WSU’s third year hosting the championship.

“Weber State is the Utah headquarters for FTC,” said Dana Dellinger, WSU’s Center for Technology Outreach director in the College of Applied Science & Technology.  “We do this because it engages the students in science, technology, engineering and math (STEM), and it promotes problem solving and creative thinking. All of those are important skills that we want the students in our state to learn.”

Student participants are proficient in STEM fields. Teams include a coach and can include a mentor. The competition uses a bracket system, putting teams head-to-head in an elimination format.

“FTC is more than just a robotics program,” Dellinger said. “Its goal is to inspire students to become innovators, engineers, scientists and creators.”

This year’s challenge is called the “Cascade Effect.” Two teams will compete in an alliance against two other teams. The students’ robots will be put into a rectangular structure. Each alliance must complete a variety of tasks involving plastic golf- and baseball-sized balls. Students will have had to program their robots to complete all the challenges.

Teens and their parents are encouraged to attend the event to see how much fun science, math and engineering can be. Volunteers are also needed.

“FTC is about students learning the value of hard work, innovation and creativity,” Dellinger said. “If parents want to provide an example and a model for their kids, this is a great way to do it.”

For more information on FTC, to see a complete schedule, and to sign up to volunteer, visit weber.edu/utftc/.