OGDEN, Utah – With $100 in his pocket and just enough English to enroll, one student went from leaving a poor country in Africa to pursuing a Master of Business Administration degree at Weber State University.

With a big smile and bigger heart, Rodrigue Kissou, is an international student from one of the world's poorest countries, Burkina Faso. This landlocked country situated in the heart of west Africa is slightly larger than Utah, but with six times the population and less than 10% of Utah's median annual income.

With geography, poverty, political instability and history stacked against him, Kissou had one thing on his side: an educated father who was determined to see his son succeed.

Seven years, six part-time jobs, three associate’s degrees, one bachelor of science degree, multiple awards, four high-level internships, and thousands of hours of studying later, Kissou will fulfill his and his father’s dreams of receiving an MBA from Weber State in April 2021.

Kissou’s journey began with few options possible because of his father's limited finances. In January 2014, he enrolled at Snow College in central Utah and left Africa's heat for Utah's freezing winters.

This first journey was no easy task. In 2014, a coup overthrew the government of Burkina Faso and brought the economy to a halt. The support from Kissou's father came to a halt as well.

Facing deportation due to mounting tuition and no way to increase work, Kissou was awarded the first “Inspirational Student of the Year” scholarship at Snow College. 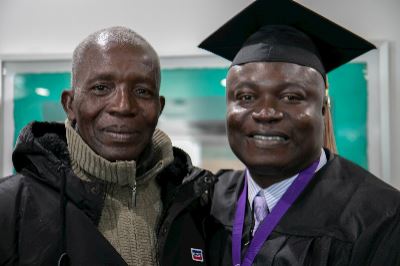 After three years at Snow College working as a custodian, at a second job in the registrar's office, and a third job helping an elderly couple do yard work on weekends, Kissou graduated with three associate's degrees: business, science and art.

When Kissou met the WSU international admissions team, he recalled: “The admission officers described Weber with small class sizes, tuition waivers for those who live on campus, and excellent faculty and staff members. From that day, I decided that I would go to Weber for the rest of my undergraduate and graduate school, even though I had not yet been admitted.”

While taking 16-17 credit hours a semester at WSU, Kissou delivered papers for The Signpost until his car broke, worked as a cook at the Wildcat Village apartments, and was finally a resident assistant.

While completing his undergraduate degree in international economics at WSU, Kissou was also recognized for his hard work and drive with two scholarships: one from the Department of Economics and one from the John B. Goddard School of Business & Economics. He was selected from hundreds of recipients to speak at the annual Goddard Scholarship banquet.

On his MBA application, Kissou wrote, “At Weber, I found myself. I found a family and I never felt alone. At Weber, my confidence grew and instilled in me a belief that I will succeed in Weber's MBA program.” 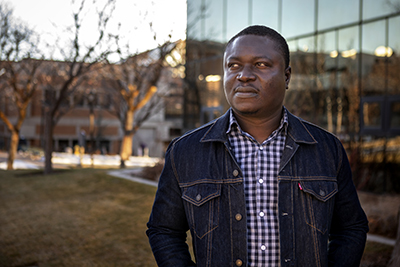 Kissou’s drive, combined with caring faculty and staff, provided him an opportunity he never imagined. Brett Merrell, career services director at the Goddard School, guided Kissou to master the interview, use his story to sell his resume, land two internships, and finally, to be accepted into the MBA program.

“Rodrigue is an incredible example of what it takes to win,” Merrell said. “He has overcome geographic, cultural, financial and language challenges that most of us would give up on. As he faces these obstacles, he is always positive, upbeat and never gives up.”

In the face of adversity, growing up in an impoverished country and navigating higher education abroad, Kissou has set the standard high for pressing on and succeeding.  In April 2021, he will be hooded with an MBA and return home to Burkina Faso.

“I also want to start a foundation where I can help children who do not have a chance in life to get an education, to finally get an education, have a place they can call home, get a job and succeed in their lives,” Kissou said.

Weber State University's MBA program has an exceptional track record of preparing working professionals and full-time students for leadership and decision-making roles in various organizational settings both locally and worldwide.

The WSU MBA program is ranked the No. 1 MBA program in Utah for Return on Tuition Investment (ROI), allowing students like Kissou to enter, succeed and move on to make a difference, wherever in the world it may be.

Kissou speaks of his journey in this short video.