OGDEN, Utah – Madeleine Sorbonne was five years old when her parents lost their home and moved into an ambulance before acquiring a plot of land in Duchesne, Utah.

She spent much of her childhood on that property, surrounded by nature, living in anything from camping tents to a mobile home. Homeschooled through seventh grade, she began exploring the outdoors and developed an early passion for wildlife and biology.

“My siblings and I would play with snakes and flip over rocks to look for insects,” Sorbonne said. “My mom would show us National Geographic magazines and Steve Irwin videos and I remember thinking, ‘I would be so happy if I had a job like that.’” 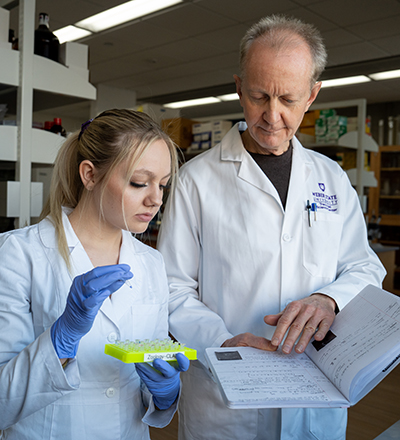 Sorbonne graduated from Bountiful High School with a high GPA, but nothing excited her more than science class. At the encouragement of a teacher and with help from scholarships, she enrolled at Weber State University and is now studying zoology.

“I knew from a young age that I wanted to be a zoologist,” Sorbonne said. “I knew exactly what I was looking for in a college. I enrolled at Weber, and I’ve been happy with it all the way through.”

During her sophomore year, Sorbonne enrolled in the WSU Undergraduate Research Fellows program and began working with her mentor, zoology professor Jonathan Clark. Their research, which earned Sorbonne a top presenting award at a national conference, focuses on identifying parasites infecting brine shrimp in the Great Salt Lake, and adding the parasites’ DNA barcodes to worldwide databases.

Sorbonne has also conducted research with Davis County, studying mosquito populations. She presented her research as part of the 74th Annual Conference of the Utah Mosquito Abatement Association.

She is also the zoology education assistant at WSU where she facilitates educational outreach by presenting on zoology topics to students of all ages. She will graduate from WSU this spring.

“Weber State gave me a platform to pursue my passions and make lifelong friends,” Sorbonne said. “At Weber State, I’m one degree closer to achieving my goal of becoming a wildlife biologist and studying the world around me.”