“It’s sometimes challenging to navigate life after the military, but we’re here to help,” Wolfley said. “We want veterans to find their place at Weber State.” 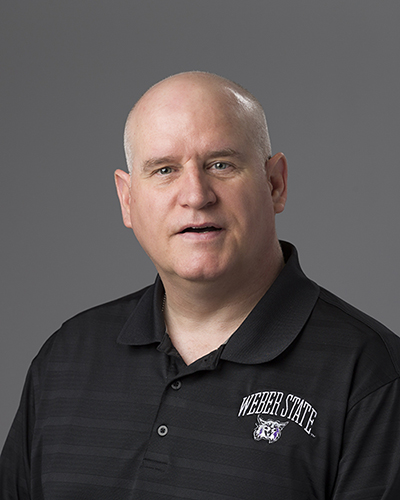 Wolfley began his active duty career as a security forces airman before transitioning to the military’s education and training career field. He served across the globe, from England to Germany and a deployment to Saudi Arabia, before retiring from Hill Air Force Base in 2016.

He holds a bachelor’s degree in communication studies and master’s degree in rehabilitation counseling, which focuses on helping people with disabilities succeed in all realms of life.

“I knew it would be challenging, but this job is a good fit,” Wolfley said. “Having served in the military, I’ve faced some of the same challenges and jumped through some of the same hoops as our veteran students.”

Wolfley has also worked for the Utah Department of Workforce Services, where he connected veterans to job opportunities across northern Utah.

His primary goal at Weber is to ensure veterans and their families receive educational benefits provided through the U.S. Department of Veteran Affairs, such as the G.I. Bill.

“Sometimes veterans feel they don’t deserve educational benefits,” Wolfley said. “But their service to our nation entitles them to these benefits, and we want to get them access.”

Students must self-identify as veterans when applying for WSU, which gives Veteran Services a more accurate picture of the demographic they aim to serve.

“That demographic has changed and broadened in recent years,” Wolfley said. “We now serve not only veterans, but also spouses and dependents – everyone who uses VA educational benefits.”

When it comes to goals for his new role, Wolfley wants to eliminate some of the worries veterans have when starting college. Aside from facilitating education benefits, he also wants to provide clearer guidance on what courses are covered by the VA, and ensure academic advisors are aware of the intricacies surrounding veteran benefits.

Wolfley encourages veterans to stop by his office, as his favorite part of the job is getting to know students.

“There’s a person behind the uniform, and we want them to be seen and known. We want to get them connected to the campus,” he said.

Wolfley said his office has a VA mental health counselor who comes to campus once a week, and a counselor from VetSuccess on Campus available four times a week to provide students with VA benefits and educational counseling.

“We want to help veterans understand some of the paths they can take, identify some of the skills they have, and how those skills can translate across different professions,” Wolfley said.

His office also heads up Veterans Integration to Academic Leadership, a peer-mentoring program to connect veterans with other veterans, and Wolfley is working to stand up the Student Veterans of America club, an organization found at universities across the nation.