OGDEN, Utah – In conjunction with its 125th anniversary, Weber State University has announced Dream 125: The Campaign for Weber State, the largest fundraising initiative in the institution’s history.

The university’s goal is to raise $125 million by June 2016. In announcing the public phase of the campaign, university officials revealed Weber State has already received $101 million in gifts and pledges since the campaign’s quiet phase began in 2008.

As of December 2013, 10,690 alumni, friends and organizations had contributed to the campaign. The university anticipates a 20 percent increase in the number of $1,000 donations this fiscal year. To date, 17 donors have made gifts or pledges of $1 million or more to the campaign. 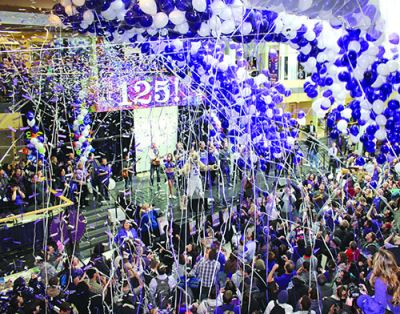 “Weber State has had a profound impact on this community for 125 years,” said Alan Hall, chair of the Dream 125 campaign steering committee and the university’s board of trustees. “As alumni of this fine institution, my family and I owe so much to our alma mater. This campaign will provide the financial foundation to continue to educate students for another 125 years.”

Hall and his wife, Jeanne, graduated from Weber State. Their six children and their children’s spouses have all earned degrees from WSU.

Campaign proceeds will address three key areas: Providing opportunity for students through scholarships and unique learning experiences; advancing knowledge by equipping faculty and staff with the tools and training needed to stay at the forefront of their disciplines; and enhancing campus resources by investing in state-of-the-art facilities and technologies.

“The Dream 125 campaign will support new learning opportunities for our students, and provide greater access to a college education through innovative programs, such as Dream Weber,” Hall said.

Established in 2010, the Dream Weber program provides free tuition and general student fees to Utah students who are Pell Grant eligible and whose annual household income is $40,000 or less.

Hall noted the campaign aligns well with the university’s core themes of access, learning and community, which date back to the original vision of Louis F. Moench, the first principal of Weber Stake Academy.

“One-hundred-and-twenty-five years is a perfect opportunity to look back on our history and celebrate all the great things we’ve accomplished for so many students and graduates,” said WSU president Charles A. Wight. “It’s also a chance to look ahead. The Dream 125 campaign will secure a bright future for our students.”

As part of its 125th anniversary, a day-long celebration was held Jan. 7 on campus and in downtown Ogden, coinciding with the date the school first opened in 1889. Alumni and friends of the university were encouraged to wear purple in honor of the milestone. Anniversary activities are planned throughout 2014.