WSU to Rename Track in Honor of Coach Hislop 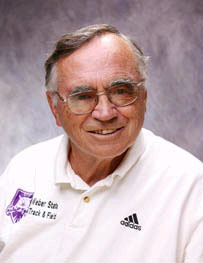 The announcement, made during halftime of the men’s basketball game vs. Idaho State University Thursday night, coincided with an honor from the governor’s office. In recognition of the coach’s accomplishments and legacy, Governor Jon Huntsman Jr. decreed by proclamation Jan. 4, 2007 Charles “Chick” Hislop Day.

Longtime WSU supporter and former Weber State College track and field athlete William “Bill” Child approached the university about renaming the track. In 1996, Child donated $1 million dollars to support academics and athletics at WSU. A portion of that money became the lead private gift to fund the renovation of the track in 1997, which was named in Child’s honor at the time.

“Chick has done a fabulous job and has certainly built the track program at Weber State University,” Child said in recommending the track be renamed in honor of the legendary coach and his contributions to WSU’s track and field program.

“This is a wonderful gesture by Bill and Pat Child to honor Chick in this manner,” said WSU President Ann Millner. “Like so many of us, Bill appreciates the lifetime of achievement and dedication Chick has given to our students, our program and Weber State University.”

“It’s a fitting tribute to Chick, whose teams accomplished so much on that track during his tenure,” said WSU Athletic Director Jerry Graybeal.