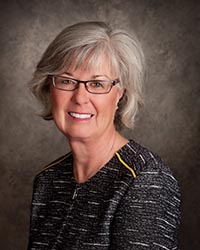 A former executive vice president and deputy general counsel for Citigroup’s credit card business, she began working there as in-house counsel in New York City in 1987.  In her most recent role, she was a member of the senior business team.  She retired from Citigroup after a 23-year successful career.

Early in her career, Bergeson worked for former U.S. Congressman K. Gunn McKay in Washington, D.C., which inspired her to get her law degree.  She started her legal career in 1983 at General Electric’s corporate headquarters in Fairfield, Connecticut, before joining Citigroup.

At Weber State University, Bergeson created an endowment in her mother and aunt’s names to support students studying to become teachers.  She began serving on WSU’s National Advisory Council in 2014 and was recognized with the Lewis W. Shurtliff Award for Contributions to Education in 2015.  She was WSU’s commencement speaker in April of 2017 and began serving as a trustee later that year.

Bergeson is a proud graduate of Ogden High School.  She received her undergraduate degree in English and law degree from Brigham Young University.  Since returning to Utah, she has lived in the St. George area.  She enjoys participating in nonprofit organizations that promote education, economic advancement and leadership for women and girls.