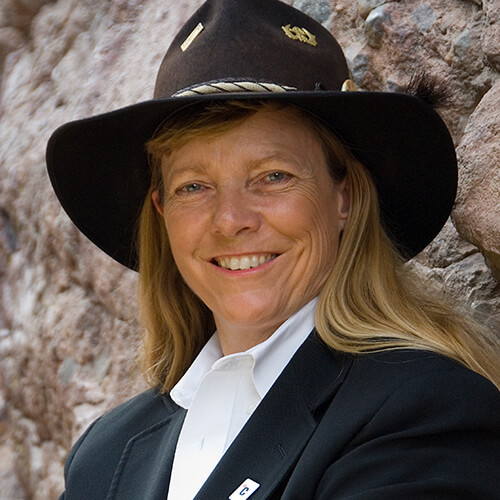 L. Hunter Lovins is the President and Founder of Natural Capitalism Solutions (NCS), a non-profit formed in 2002 in Longmont, CO. A renowned author and champion of sustainable development for over 35 years, Hunter has consulted on sustainable agriculture, energy, water, security, and climate policies for scores of governments, communities, and companies worldwide. Within the United States, she has consulted for the Presidential Cabinet, Department of Defense, EPA, Department of Energy and numerous state and local agencies.

Hunter believes that citizens, communities and companies, working together within the market context, are the most dynamic problem-solving force on the planet. She has devoted herself to building teams that can create and implement practical and affordable solutions to the problems facing us in creating a sustainable future.

Hunter has co-authored fifteen books and hundreds of articles, and was featured in the award-winning film, Lovins on the Soft Path. Her best-known book, Natural Capitalism, has been translated into a more than three dozen languages and summarized in Harvard Business Review. Its sequel, Climate Capitalism, won the Atlas Award. Her latest book, A Finer Future won the Silver Nautilus Award.

Hunter has taught at numerous universities around the world, was a founding professor of Sustainable Management at Presidio Graduate School. Currently she is a professor of Sustainable Management at Bard MBA. Named a Master at the Chinese De Tao Academy, Hunter helped launch the Institute for Green Investment in Shanghai, and she is a Fellow of the Fowler Center at Case Western University.

Lovins has consulted for scores of industries and governments worldwide, including International Finance Corporation, Unilever, Walmart, the United Nations and Royal Dutch Shell, as well as such sustainability champions as Interface, Patagonia and Clif Bar. She has briefed heads of state, leaders of the numerous local governments, the Pentagon, Congress and officials in more than 30 other countries.

Hunter lectures regularly to audiences around the globe. She has worked in economic development from Afghanistan to New Zealand, and served the King of Bhutan on his International Expert Working Group, charged with reinventing the global economy. She sits on the Executive Committee of the Club of Rome, the steering committee of the Alliance for Sustainability and Prosperity, and Capital Institute’s Advisory Board. A founding mentor of the Unreasonable Institute, Hunter teaches entrepreneurship and coaches social enterprises around the world. She is also a founding partner in Principium, an impact-investing firm. Hunter has won dozens of awards from the Right Livelihood Award (Alternative Nobel), Leadership in Business, the Rachel Carson Award, and the European Sustainability Pioneer award. Time Magazine recognized her as a Millennium Hero for the Planet, and Newsweek called her the Green Business Icon.